Showing posts from September, 2007
Show all

This is an article taken from the Malaysian Bar website which I received...

PUTRAJAYA, Wed: "Lawyers don't walk everyday. Not even every month. But when they walk, then something must be very wrong," said Chairman of the Bar Council Ambiga Sreenevasan when addressing a strong crowd of more than 2,000 members of the Malaysian Bar and some concerned citizens at the Palace of Justice before the commencement of the walk to the Prime Minister's office to hand over the Bar's memoranda urging the government to set up a Royal Commission of Inquiry to probe the state of judiciary.

Earlier, seven buses ferrying members of the Bar and public from Kuala Lumpur were denied entry to Putrajaya. Frustrated with the police tactics which included sending a helicopter hovering above the crowd, Bar Councillor Edmund…
2 comments
Read more

After 50 years of independence, Malaysian lawyers have to do a march to protest to save our judiciary which is not independent??? What independence then do we have? What have we been celebrating all these years?

With regards to the famous "Lingam Tape" Nazri, the Minister in the Prime Minister office has to issue a statement on behalf of the Chief Justice saying that “I am his minister”.

He said: “I am his minister. I am the minister in charge of legal affairs. He is clever enough to know that the reporters will ask me for a response.” [from an article found in a local paper]

Nazri, has just reinstated the core issue of the “Lingam Tape” where everyone is questioning the independence of our judiciary system. His statement goes to show that the fundamental doctrine on the separation of powers of the Executive, the Legislature and the Judiciary does not exist at all. He seemed to claim that the CJ knew about this and therefore has allowed Nazri, his superior to answer for him.

I have so far never had any interest in politics nor have any political statements to make. But there are times when we found ourselves no longer able to deny the fact that everything that is happening with the politician had in fact, everything to do with us, we cannot just sit back and shut up. There will be a point of time in our lives we will unwittingly find ourselves at a crossroad - to shut up or to stand for our rights.

The disclosure of the notorious “Lingam Tape” had put us in a situation that we all cannot just ignore.

The question that remain…is the tape authentic? If so who revealed it? An allied of the people or an enemy of the state.

The silence of the Chief Justice is deafening.

The comments by Nazri telling us not to blow it out of proportion…is nothing but shocking.

The billion ringgit courthouse, the pride of the country but the shame of the people. I therefore support the march by the Bar Council on 26 Sept 2007 to save our Judiciary.
Post a Comment
Read more


Daddy sends me an email on 50 reasons why its fun being a parent. Here is a list of my own:


Smelling the best smell…a sleepy baby
Sitting up breastfeeding my baby while she smiles at me, feeling content and happy
Being ever so tired but yet feeling happy at the same time
Having my baby’s tiny fingers wrapped around my finger which she finds it so fascinating and oh how she will look and study my hand
Listening to my baby’s laughter and squeal to our silliness
Feeling amazed to know that I am the only one (besides Daddy) can comfort the little bundle
Realizing that everyone is attracted to my baby and everyone wants to talk to me
Watching my baby sleeps beside me and how every time she will stay close by and left me sleeping at the edge of the bed
Feeling proud knowing that my baby wants me to hold her each time she caught sight of me
Experiencing the joy holding a sleeping baby in my arms
Being infectious with my baby’s smile and laughter
Reali…
2 comments
Read more 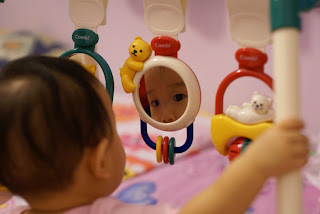 We were watching Sara playing by herself with the baby play gym when we caught her staring at herself in the mirror. We know how babies get all excited watching themselves in the mirror despite the old wives tales saying that it is not good to let you baby see the mirror for reasons I don't know.

This is the story that I would like to share to all mothers and mothers-to-be...the deep, cleansing breath of a mother with a teenage daughter...

'Donna and I went shopping with our daughters today. Her Natalie is sixteen, my Rachel is eight. The excursion went something like this: 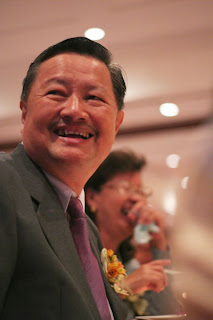 My dad-in-law passed away on September 1, 2007 to begin an eternal life with our Lord.

He was a man with few words, gentle in his ways and had a generous heart to all. He had led a hard life but he was blessed with a loving and faithful wife and three wonderful sons.

He had fought a long hard battle of cancer for years. And throughout his life, he kept his heart closed against the Lord. Due to persistent prayers of those who love him and the brotherly love of Sitiawan Methodist Church members, my dad-in-law accepted the Lord Jesus as his personal Saviour, follow thereafter by my mum-in-law. They were both baptized last month.

His sickness took a bad turn last week and the sons were called to return home to see him for the last time. There were a few times that they thought my dad-in-law was not going to make it but he managed to pull through.

It came to a point, my brother-in-law prayed for a confirmation from God the time which my dad-in-law will be called home. The day before my dad-in-…
7 comments
Read more
More posts

Mommy-yeoh
Fully employed in the corporate world and a mother to 2 amazing kids filling her everyday with laughter, joy, tears, anxiety and hoping every minute of the day (and the many years to come) that her kids would not give her a cardiac arrest!